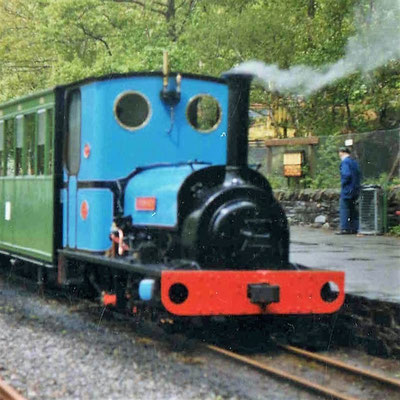 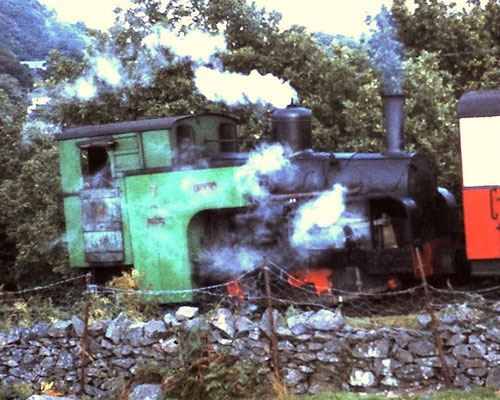 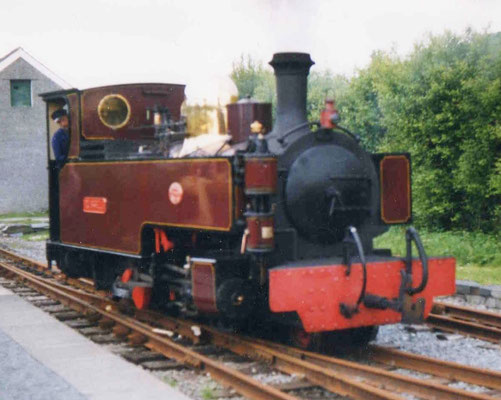 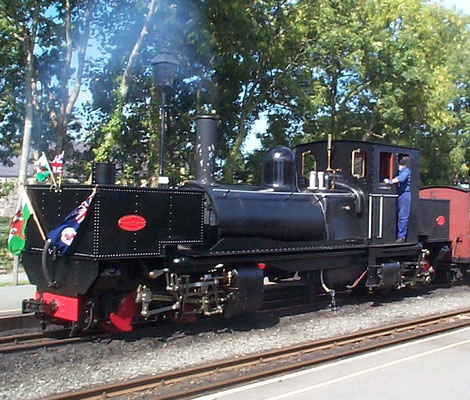 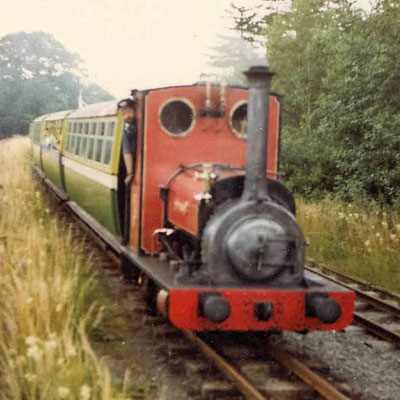 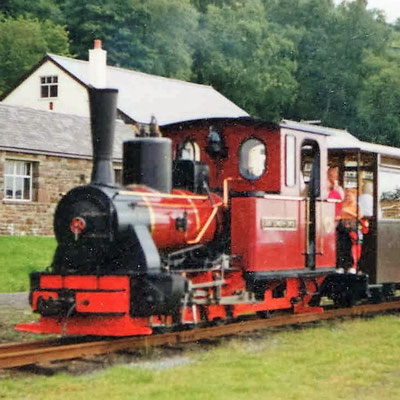 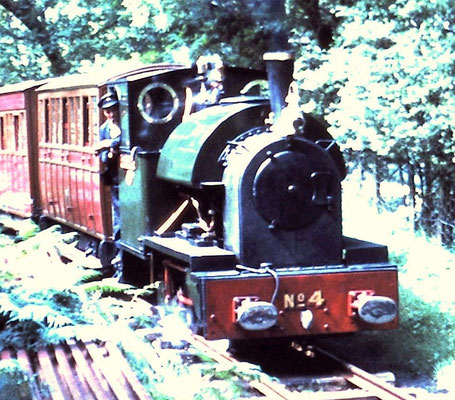 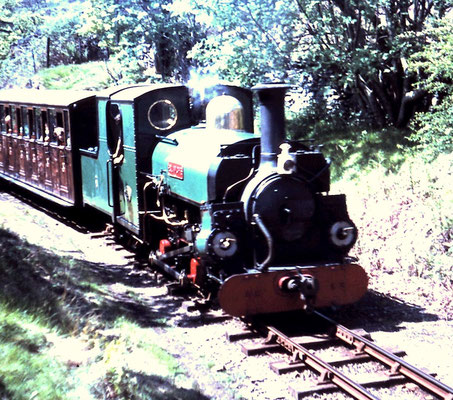 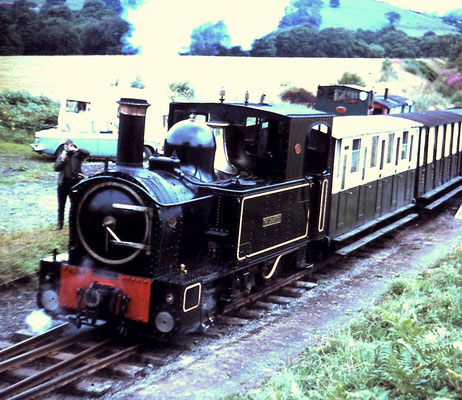 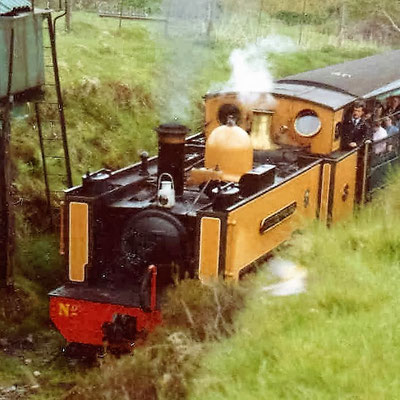 Over the years many narrow gauge railways in Britain have sadly closed down and now cease to exist. However, a number of these have been or are being revived even after being closed and dismantled many years ago. One of the first to start operating again (in 1971) is the Llanberis Lake Railway which has been rebuilt as a 2 foot gauge railway for visitors to the Padarn Country Park. Utilising track materials and locomotives from the now closed Dinorwic Slate Quarry whic is adjacent to the railway. The current railway runs for jus.t 3 miles from a new station in the town (opposite the Snowdon Mountain Railway terminus, past Gilfach Ddu (home of the Welsh Slate Museum) to Penllyhn alongside Lake Padarn and is built on part of the trackbed of the old Padarn Railway which was originally built as a 4 foot gauge horse drawn railway in 1846 to link the Quarry to Port Dinorwic situated on the Menai Straits between Bangor and Caernarfon.

gauge railway from Llangollen to Dolgellau is the Bala Lake Railway which also uses former quarry locomotives. The railway runs for just over 4 mile from Llanuwchllyn to Penybont (just outside Bala). This railway opened to the public in 1974 and is run mainly by volunteer staff. A third 2 foot gauge railway which also co-incidently runs alongside a lake (actually a reservoir) for part of its journey and is also built on the trackbed of a former GWR standard gauge railway

(Newport to Brecon) is the Brecon Mountain Railway in South Wales. The steam motive power

used on this line has mostly been imported from abroard.

Two other narrow gauge railways in Wales have recently been or are in the process of being rebuilt. The principal one being thew legendary Welsh Highland Railway which originally ran from Dinas (3 miles south of Caernarfon) to Porthmadog passing through Beddgelert and the picturesque Aberglaslyn Pass on the way. This two foot gauge railway only operated from 1923 to 1937 when it closed down in  spite of being leased to the Ffestiniog Railway in 1934. After closure the railway and rolling stock remained derelict until 1941 when it was dismantled and all rolling stock disposed of (mainly for scrap). However, in 1961 a Preservation Society was formed with the avowed intention of re-opening all or part of the railway. After many years of negotiation, political battles and public enquiries the green light was finally given in 1996 for the entire 22 miles of railway (plus the never built 3 mile section between Caernarfon and Dinas) to be rebuilt by the Ffestiniog Railway which was expected to take about 5 years to complete. The first section to be completed (phase 1) was from Caernarfon to Dinas and this opened to the public in late 1997. However, it took another 3 years to get to Waenfawr (Phase 2), which re-opened in August 2000., and a further 3 years to reach Rhyd Ddu (Phase 3) in August 2003.

Re-construction paused for a while during which time additional funds were sourced, the remaining 12 miles to Porthmadog having to br rebuilt in one go (Phase 4) due to planning constraints. Work eventually got underway in January 2006, starting from the existing railhead at Rhyd Ddu and by mid 2007 tracklaying had reached Beddgelert, and by October had passed through the Aberglaslyn Pass and reached as far south as Nantmoor. Rapid progress was made with track laying, Haf-y-Llyn being reached by theend of 2007 and Pont Croesor by mid 2008.

The trackbed between Pont Croesor  and Traeth Mawr was then prepared (including two new over bridges) track being by the end of August 2008. The route through porthmadog from Pen-y-Mount to Harbour Station (including crossing of the Cambian Line at Cae Pawb and partial rebuild of Britannia Bridge) was finally completed by the end of 2008. However, the re-opening of the complete route did not take place in 2009 as planned for various reasons but trains were running from Caernarfon to Pont Croesor by mid 2010. The line was eventually opened throughout in Spring 2011. Motive power for the railway comprises 6 Beyer-Garratt

locomotives (five from South Africa and one from Australia) with smaller locomotives supplied by the Ffestiniog Railway.

The original WHR Preservation Group (Welsh Highland Heritage Railway - formally known as WHLR (1964) Ltd.) who have been based at Gelerts Farm (Beddgelert Siding) for a number of years and operate trains over 3/4 mile from Tremadoc Road to Pen-y-Mount (since 1980) had reached an agreement with the Ffestiniog Railway to start re-building the WHR northwards, initially to Pont Croesor (just under 2 miles from Porthmadog) but then on to meet the line being built southwards from Rhyd Ddu. However, The WHHR only managed to rebuild as far as Traeth Mawr (a mile short of original target of Pont Croesor) but they did operate trains over the new section from 2007 to end of 2008. Unfortunately, for a number of reasons the WHHR have not been allowed to access the WHR main line since then. Remarkably, one of the original WHR locomotives has survived despite the railway being closed over 70 years ago. The locomotive

is Hunslet 2-6-2T 'Russell' which was built in 1906 for use on the North Wales Narrow Gauge Railways, a forerunner of the WHR. After closure of the line in 1937 the locomotive was eventually sold (in 1941) into industrial service before being rescued for preservation in 1953. After many years in storage at various locations it passed to wHRL (64) who purchase a new boiler (from the Hunslet Engine Company) and restored it to working order in 1987. After working until 2006 the locomotive was withdrawn for for a major overhaul which would see it returned (as far as was practicable) to its original as built condition with 'Russell' retuning to traffic in 2011.

The other Welsh narrow gauge still in the process of being rebuilt is the Corris Railway which was originally built in 1859 with a gauge of 2 foot 3 inches ti link quarries at Corris with Machynlleth. Horses were used as motive power until 1878 when 3 steam locomotives were purchased. Passengers were carried from 1883 until 1931 (the railway having been acquired by the GWR in 1929) but slate was carried until 1948 when the railway was suddenly closed due to the bridge over the River Dovey being damaged by floods. The last 2 remaining steam locomotives were placed in store at machynlleth until both were purchased by the Talyllyn Railway in 1951. The Corris Railway Society was formed in 1966 and opened a Museum at the old Corris Station in 1970. A short section of railway (3/4 mile) from Corris to Maespoeth, where the original locomotive is located and which has been restored, was re-opened in 2002 using a small Ruston Hornsby diesel locomotive and replica coach. An appeal fund was launched in 1999 to construct a replica Kerr Stuart 'Tattoo' 0-4-2T steam locomotive which has now been completed (cost £60,000) and was delivered to the railway in early 2005. It is intended to extend the railway up to 2.1/2 miles to Tan-y-Coed sometime in the future and construct a second replica steam locomotive (to Hughes Falcon design). Incidently, two original Corris locomotives

have survived but these are both owned by the Talyllyn Railway and remain in use on that line.

Finally, perhaps the most ambitious scheme is to rebuild the Lynton & Barnstaple Railway which from 1898 to 1935 linked the two toens, a distance of some 20 miles at a gauge of 2 foot.

Unfortunately upon closure all the locomotives and rolling stock was sold, most of it for scrap but two complete coaches were saved (one was rescued by the Ffestiniog Railway, the other is in the National Railway Museum at york. No locomotives have survived (one - 'Lew' was exported to Brazil in 1936 but has long since disappeared). The Lynton & Barnstaple Railway

Association (now Company) was formed in the 1980's and after many false starts and abortive attempts to acquire parts of the former trackbed, has managed to purchase b oth Woody Bay and Chelfham Station sites and ajoining sections of trackbed. The first section from Woody Bay to near Paracombe (1 mile) has been re-opened. However, most of the trackbed had been sold off over the years so it will be a long and difficult process to acquire, rebuild and re-open the whole line. Fortunately, the major feature of the line, the impressive brick viaduct at Chelfham

stll survived and as a listed structure must be maintained. The viaduct was recently restored with the missing parapets replaced and has now been acquired by the railway from BR Estates,

so it could see trains again at some point in the future. A Kerr Stuart 'Joffre' Class 0-6-0T locomotive ('Axe') was purchased some time ago and has now been restored to working order and is on use on the line. Schemes also exist to build replicas of Baldwin 2-4-2T 'Lyn' and Manning, Wardle 2-6-2T 'Yeo' which both formally worked on the line. (Another replica MW 2-6-2T 'Lyd' has already been built by the Ffestiniog Railway which has made frequent visits to North Devon - the first being in September 2010). A surviving bogie brake van (found on a farm)

has been restored and at least four coaches are in the process of being constructed from remaining sections of original vehicles which have somehow survived as sheds or summer houses.

Other narrow gauge railways such as Ffestiniog, Welshpool & Llanfair or even the Groudle Glen

in the Isle of Man were perhaps more fortunate in that while they were closed down for a number of years, they mere not dismantled and most of the original locomotives and rolling stock have survived more or less intact. A number of narrow gauge lines did not even close (except perhaps during the Winter months) and are still running today such as the Talyllyn Railway and Vale of Rheidol Railway, both being located in mid-Wales, and the Snowdon Mountain Railway all of which still operate with original locomotives and rolling stock. The

been closed and dismantled (the line from Douglas to Port Erin is still operated with some of the original Beyer Peacock 2-4-0T locomotives). Also on the Isle of Man is the Douglas to Ramsey Electric Tramway, Laxey to Snaefell Mountain Tramway and the Laxey Mines Railway (with replica steam locomotives 'Ant' & 'Bee'). 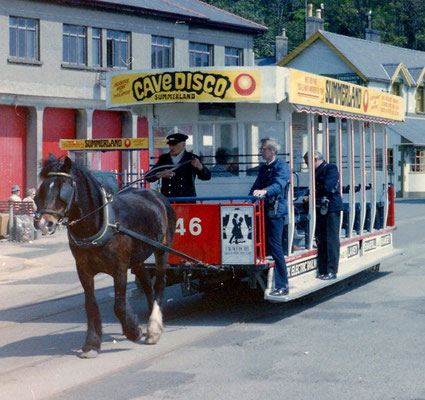 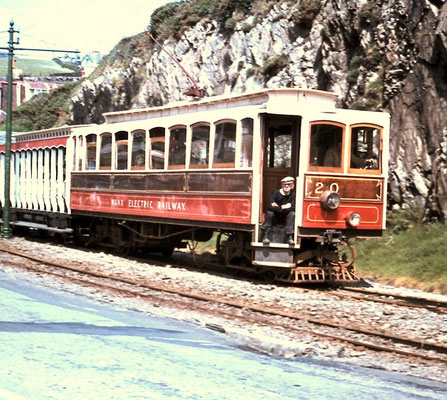 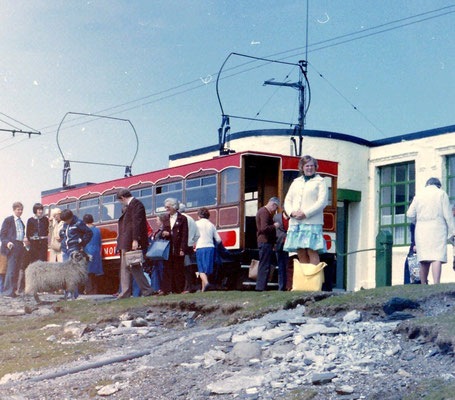 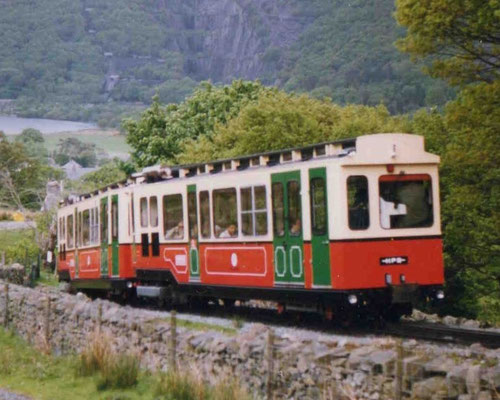 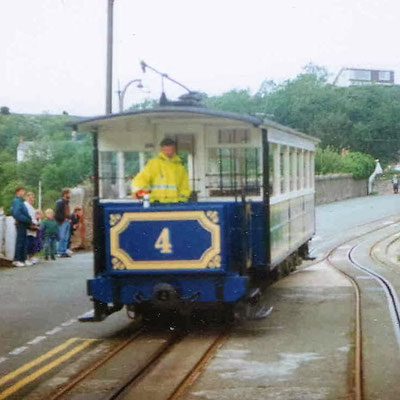 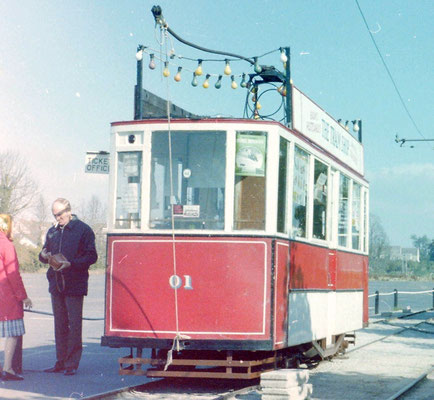 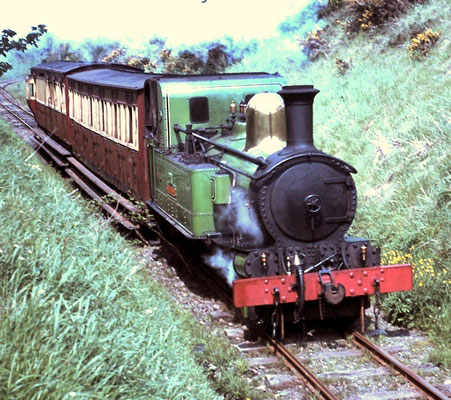 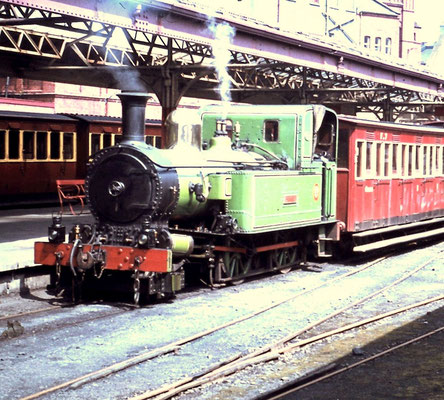 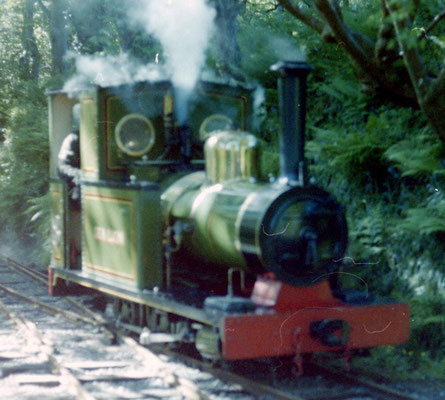 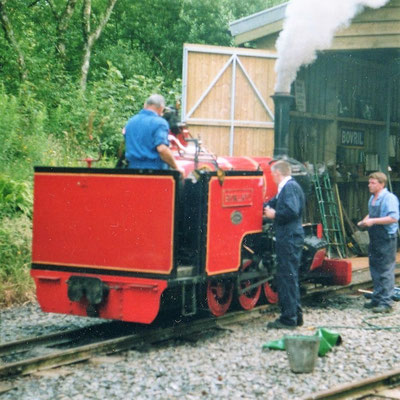